One of our classmates, Ken Allard, has written a series of articles for Real Clear Defense. It is quite an honor to be published there. There is a reference to our 50th reunion in this article. If you would like to read the piece, here is the link. 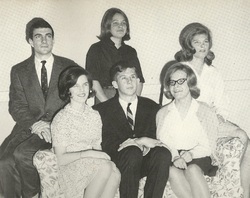 Connie Harrison [Shaffer] completed a BA in French at Bucknell University.  Connie taught French at Roland Park Country School for Girls for a few years.  She went on and finished her Master’s and Doctorate at Rutgers Univ.  At Bucknell, Connie met her husband Bill, a Gilman graduate.  They now have 2 children & 5 grandchildren, all living in or near Princeton NJ, where Connie headed the foreign language department at the private preparatory Hun School of Princeton until her recent retirement. She and her family have traveled extensively – esp. in France where she had the chance to practice her professional language training.  She also gets lots of practice with her new hobby, using a Nikon D7000 camera photographing travel adventures and precious grandchildren!  Currently she is kept quite busy as a docent at the governor's mansion in NJ, a docent in training at the Princeton University Art Museum, and doing volunteer ESL (English as a Second Language) tutoring.  Connie paints with oil colors in her “free” time. She also keeps fit at her son in law’s gym, plays tennis and ice dances.

Richard (Rich) Solli earned a BS in Management & Economics from the Univ. of Virginia in ’69, and his MBA in Marketing from Loyola College in Baltimore in ’83.  Rich saw active duty with the US Navy from ’69 to ’73 and served in the Naval Reserve until 1999 when he retired as a Captain.  He joined McCormick & Co. in 1976.  After 21 years there in various sales & marketing positions, he left to become the Director of Marketing for the Maryland Transit Administration.  He retired from the MTA in 2013.  He also worked as an Adjunct Instructor of Marketing for The Carey School of Business at the Johns Hopkins University.  He married Ann McNeilly of Rehoboth Beach, DE and they spend summers in Delaware and winters in The Villages, FL.  Their oldest daughter, Christy, is an LCSW counselor at St Joseph's Hospital in Towson and younger daughter, Alexandra, is a 3rd year vet student at the Univ. of Florida.  Rich says life has been good ... no worries mates!

Linda Wade Boyce, 60, of Thousand Palms, CA, passed away on the morning of May 4, 2008 in Palm Desert, CA.  She married Douglas Maclain, who preceded her in death.  Linda attended Missouri Valley College in Missouri. She enjoyed cheerleading and later worked in Washington, DC as a freelance photographer for the Washington Metro System. She also worked as a lifeguard and pool attendant. Linda's loving and compassionate spirit for all people will always be remembered.

Richard (Dick) Holliday was at U of MD for 2 years, and in ‘67 the US Coast Guard, duty included  2 years on an icebreaker that circumnavigated the globe and made trips to the Antarctic and Arctic.  Back at U of MD in ’71, while working on his BA, he met and married Susan Brooks; he finished a BA at Towson Univ. in ’74 in Accounting & Finance.  After graduation the couple toured the US for 2 months before Dick went to work with Ernst & Ernst in Baltimore. His career included work at the First National Bank of MD, Browning Ferris and from ’80 to ’96, Westinghouse Electric (-W-). From ’76 to ’81 he completed an MBA at Loyola College and passed the Maryland CPA. His finance assignments at -W- included work in Hunt Valley MD, Ireland, Germany & Sunnyvale CA.  In ’96, in CA, he left –W- and joined Hewlett Packard.  After 3 years in Silicon Valley, HP assigned him to Germany, where he worked until his retirement in 2009. Today he lives in Tübingen Germany.  Dick and Susan have a daughter and son living in the US, and keep busy with traveling, hiking, jogging, yoga and cross-country skiing.

Leigh Walton was a member of the class of 1966.

Nancy Miller, who was married to our classmate David Rupprecht, who sadly died.  Her last name may have changed to Portesi, and her last known address was in California.  Until now, we have been unable to locate her and get an update. 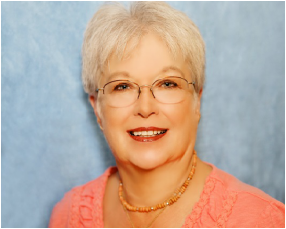 Did you know that: Nancy briefly served in the US Air Force and was honorably medically discharged. Nancy now lives in Ft. Pierce, Florida with her finance Lin.  A Master quilter, she teaches quilting and embroidery and is internationally accredited  as a Jenny Haskins instructor for both embroidery and quilting.  Nancy and Lin enjoy traveling in their 42 ft Winnebago Tour Motorhome with Sunny, a Golden-doodle dog and Reynaldo their Orange Tabby cat. They winter in Marathon FL, where Nancy & Lin fish, snorkel and dive and she teaches quilting to her private students. In the summer, they use their Ft. Pierce home as base but usually they can be found on the road traveling in their motorhome seeing State and Federal parks. 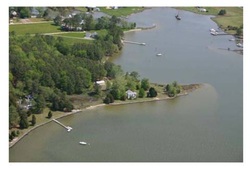 Walt Miles writes:  My maternal ancestry is rooted on Gwynn's Island at the mouth of the Piankatank River and the Bay.  Many of my ancestors were Bay watermen.  Many went from the Island to sea with the merchant marines.  My grandfather was a ship's captain for the Bull Line and typically ran from New York to Galveston, making many trips up the Bay to deliver Cuban sugar cane to Domino's and spices to the old McCormick factory at what is now the Baltimore Inner Harbor.  One of my sisters owns the pre-civil war residence where my great-grandfather was born on the Island.  It’s the one just to the left of the point of land jutting into the creek.  My other sister owns the house up creek with the pier jutting into the creek and I own the woods and field in between.  I consider the Island my true roots.  Having enjoyed reading James Michener's book The Chesapeake and viewing the PBS documentary flyover of the Bay, I am looking forward to seeing this film.  Thought you might like to know that it is coming.  www.chesapeakethefilm.com 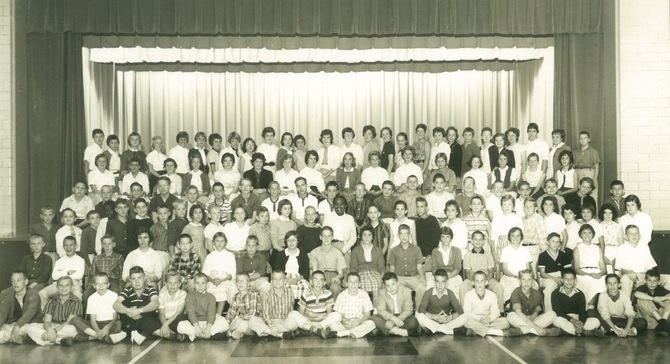 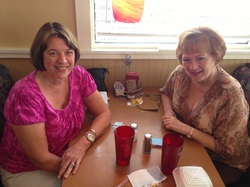 In searching for classmates, Donna Lawson Croff (left)  who lives in Altamonte Springs, FL, discovered that her sorority sister Beth Hook Strott (right) lives only 15 miles away in Apopka, FL.  They enjoyed a lunch together and caught up on the last forty eight years.  Beth is working as an RN and is very involved with her two grandchildren, Caleb (age 9) and Kaleb (age 7).  Donna is retired from real estate and when she is not searching for classmates, she enjoys playing golf and bowling.  She is an avid quilter and an active member of P.E.O., a philanthropic educational organization. 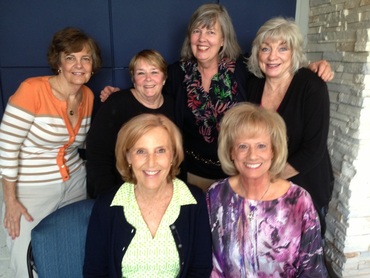 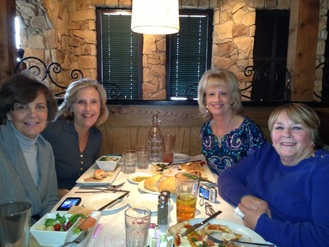 April 4, 2013
From left to right - Marti Winter-Devlin, Carol Weidmuller-Fiztpatrick, Jackie Gross-Dorfler and Susie Jones-Mitchell enjoying a lunch together.  I am so jealous that I wasn't at that table.  They had a blast!

PICTURES OF THE IMPROMPTU 45TH REUNION BELOW 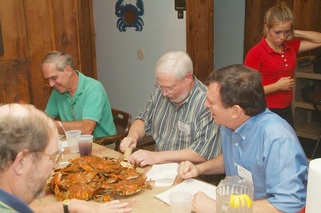 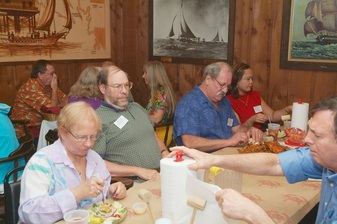 Jean Taborsky on the left.  Tom Kurtz in the blue shirt with his wife Marie in the red. 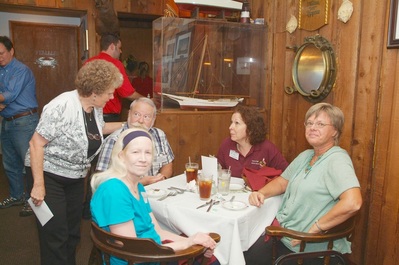 Dan Williams is surrounded by four women.  Rachael Alexander-Springer is standing, and Martha Anne Christensen is wearing turquise.  Sue Knorr is in the pale green and Lynda Bull Clarke (Class of 1966) is in the maroon. 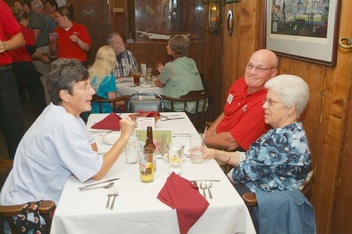 Would you recognize Marcia Maldeis on the left or Lynne Roemer Strausser on the right? The gentlemen in the picture is Lynne's husband. 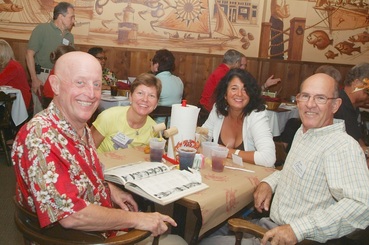 John Owens and hiswife Dolly on the left, and I believe Jim Palmer and his wife on the right. 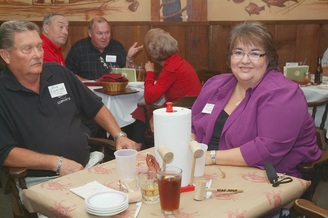 Pat Oglivie Liscomb and her husband Don who also graduated from Towson in 1963. 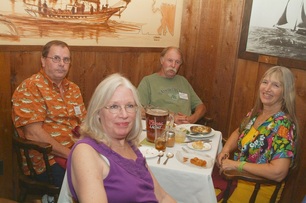 The woman on the right with long, long hair, is Pati Quinn-Dirzuweitt and I believe her husband is sitting next to her.  In the purple is Linda Smith-Nielson and my guess is she is sitting with her husband too. 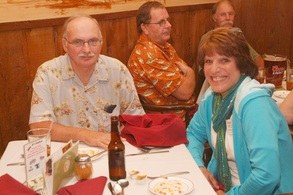 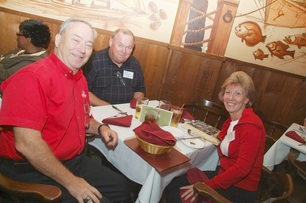 Pete Rohde is the man in the middle, but help me with the others. 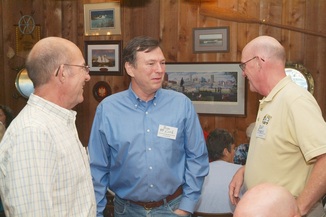 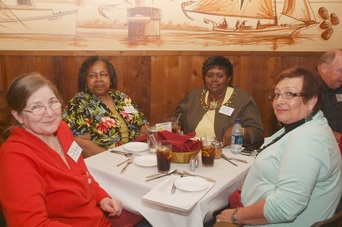 From left to right, Rachael EurichHairsine, Diane Warner  Sembly, Jackie Smith and Cindy Gagliano Hutson on the right.  Since that picture was taken Cindy has lost 60 pounds.  Congratulations Cindy, you look great! 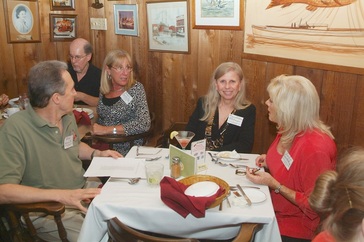 On the left is Gene Scarpulla with his wife in the center.  Carole Capriotti-May is the blonde dressed in red.  I would have never recognized her. 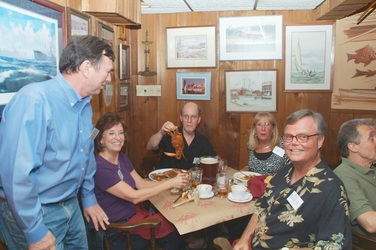 Tom McCord is standing to the left.  Sandy Meyers Holtz is in the purple with Ross Holtz next to her.  Dan Hardesty is sitting to the right with his wife, Donna, next to him. 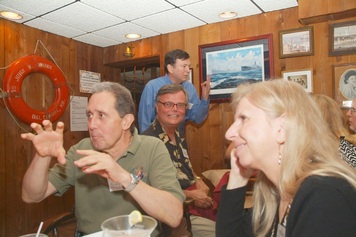 I recognize Danny Hardesty, the man in the middle wearing glasses, and that's  Gene Scarpulla on the left forward. Tom McCord is standing in the back.  But who is the women?

Do you recognize these classmates?  Get out your yearbooks and check us out now compared to then.  Please send your pictures to us to include here. 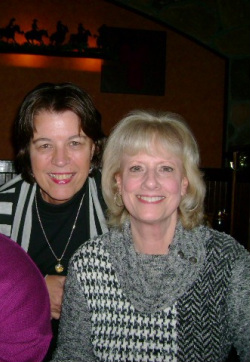 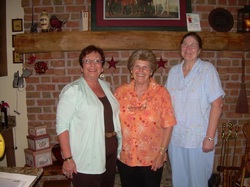 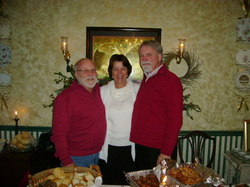 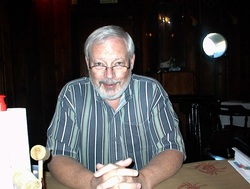 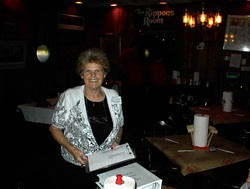 Rachael Alexander Springer at the Impromptu. 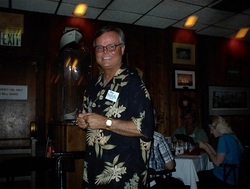 Dan Hardesty at the Impromptu. 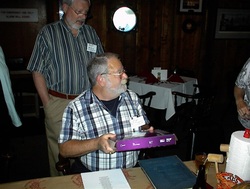 Dan Williams at the Impromptu with Walt Miles standing behind. 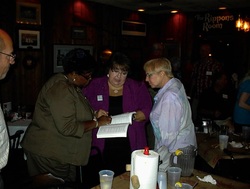 From left to right:  Jackie Smith Pat Ogilvie Lipscomb
and Jean Taborsky at the Impromptu. 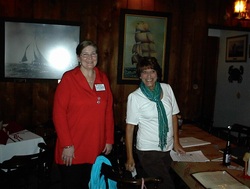